T/N: Thank You Lynn for the kofis! I will be uploading extra chapters so watch out!

Zhuang Yi pretended to be dead for five minutes. The phone’s screen by his side was still lit. Xie Jun saw that he still hadn’t replied and made a call.

Zhuang Yi hurriedly went under the blankets and smothered his head in it. After about half a minute, he lifted the blanket. He was ‘flustered’ as he got off the bed and ‘drowsily’ picked up his phone. He yawned as he received the call and said in a nasal voice: “Hello?”

Zhuang Yi: “Great Xie? I fell asleep. Sorry, ah. Why are you calling?”

Zhuang Yi felt that his acting skills were quite good, especially that realistic nasal tone. He really sounded as if he had just been awakened suddenly from his sleep by the ringtone.

Xie Jun calmly said: “You didn’t reply to my message. Did you fall asleep and not see it?”

“Yeah, sleepy ah.” Zhuang Yi opened his mouth to make another loud yawn. “I fell asleep by accident. What message did you send again?”

Xie Jun chuckled and lowered his voice: “I said I love you and I miss you. I want to enter your dreams at night so I can kiss you, and adore[1] you.”

Zhuang Yi was halfway through a yawn when he stopped.

You definitely didn’t say something that sappy!

But Zhuang Yi had already said that he hadn’t seen the message. Even if he knew that Xie Jun was just blurting something out of the blue, he couldn’t point it out.

Zhuang Yi stiffly uttered: “Is it amusing? Hanging up!” He didn’t wait for Xie to reply and quickly hung up the phone.

He laid back down on the bed, covered himself with the blanket and went to sleep.

But it was dark and silent under the sheets that Xie Jun’s deep voice still seemed to be ringing in his ears. He covered his ears. The veins in his burning hot ears, pulsating with ‘thump thump’, and Xie Jun’s “love you, miss you, kiss you, adore you” blended together like a duet in harmony, tugging on his heartstrings.

He shook off the blanket and got up. His face was extremely red and his hair was disheveled as he lifelessly froze for a bit.  Thoughts racing in his mind, he picked up the basketball under the bed and began to frantically throw it towards the basket hanging on the opposite wall.

The ball repeatedly flew from his hand and bounced back. The sound of it pounding on the floor was as powerful and annoying as his heartbeat.

The next day, he went to school with a pair of dark circles under his eyes.

Fang Shucheng said to him empathically: “The problem yesterday was quite difficult. Did you also do it until midnight? Did you figure it out?”

Li Xin: “That problem was beyond the scope of the syllabus. You need to use calculus to solve it. Fang Shucheng, have you done it?”

Li Xin coldly clenched his teeth and asked Zhuang Yi: “How about you? Did you do it too?”

Zhuang Yi knelt down for them and said honestly: “When I encounter those kinds of problems, I just skip them.”

Li Xin was satisfied: “That’s right. I don’t know how to do it either. Let us get Fang Shucheng to explain it for us.”

Can’t really understand the world of you top students. -_-

After class, Zhuang Yi still had rehearsals. He saw Xie Jun also going to the rehearsal room. His scalp went numb and he hastily reminded him, “You don’t have scenes today. You should quickly go to the court.”

The scenes today were mainly about the second scene ball. The witch was naturally not among those invited to the ball.

Deputy Monitor: “Didn’t you know that the script has been changed?”

Zhuang Yi: “I didn’t know! I’ll go look at what has changed.”

The deputy monitor handed over the script. Zhuang Yi turned over to the second scene and found out that there was an added plot— The witch used a spell to change her appearance. She successfully disguised herself as the dolphin prince and snuck into the ball. The handsome and elegant dolphin prince soon won the heart of the mermaid princess and received the precious opportunity to dance with her.

Zhuang Yi was sincerely seeking instruction: “Won’t this be OOC? Yesterday, the mermaid princess was quite noble and cold, but today. she fell in love with the dolphin prince at first sight?”

The deputy monitor earnestly replied: “Yesterday, the witch was dressed in a black robe so her face was not clearly seen. Today, she disguised herself. She became both handsome and suave but most all, a prince. Put yourself in her shoes and think about it. If you were her, wouldn’t you fall too?”

Zhuang Yi imagined himself as the princess, and abruptly came back to his senses: “I’m a guy. Why would I like it when the witch becomes handsome?”

Zhuang Yi impulsively said the wrong thing and immediately fixed it: “I already liked the witch very much when she wasn’t handsome okay?”

The deputy monitor sighed: “I have been taught. Sure enough, the mermaid princess and the witch truly love each other.”

Xie Jun was reserved: “Thank you everyone. We are already together.”

Everyone laughed. They thought the Great Xie was really fond of making jokes ah. Hahaha.

As the only one who understood the true meaning behind Xie Jun’s words, Zhuang Yi’s expression was complex.

Before the formal rehearsal, the props group reported good news: “We have the witch’s costume.”

Everyone was a little excited and nudged Xie Jun to quickly try on the clothes. Everyone had been squealing in admiration when he left to change in the restroom.

The witch’s costume, which was borrowed from the next class, was a Harry Potter robe brought back from America. Super Cool!

Moreover, the person who would wear it was also handsome. The result was simply amazing!

“As a witch’s costume, it’s really a little bit out of fashion.” The deputy carefully evaluated.

The class monitor ridiculed: “In any case, the plot is very melodramatic[2]. There’s no need to even try on the clothes, just look at how handsome he is.”

The deputy monitor lifted his glasses: “Please pay attention to your words.”

There was no doubt that this was a party among the sea-people. They gathered at the Crystal Palace’s ballroom and went before the mermaid princess to give their blessings for the birth of her beautiful sister.

They all knelt before the mermaid princess and piously kissed her hand and tail but not a single one dared to invite her to dance.

The mermaid princess overlooked them all with pride and loneliness.

At the corner of the stage.

The witch poured the suspicious liquid she concocted down her throat and chanted something, activating the sinister magic. As the witch’s black robe slowly slipped down her body, the ugly witch who was once mocked by the mermaid princess transformed into the tall and handsome dolphin prince.

An ambiguous dark light flashed in the dolphin prince’s eyes before fading out. He suddenly revealed a gentle and kind smile that brought light into the dark corner.

He opened the door out of the narrow □□ room and left. He soon arrived in front of the doors of the Crystal Palace’s ballroom.

The moment that he appeared, even the music that hadn’t stopped playing turned low and soft. The sea-people, out of respect, successively halted their merry dancing and gazed at the distinguished handsome guest entering the doors.

“Will you forgive me?” The dolphin prince said a composed but sincere apology, “Pardon this tactless me. In order to work hard to please you, I had no choice but to leave two minutes before the ball started.”

The dolphin prince walked towards the mermaid princess. He bowed down and extended a hand in invitation.

The mermaid princess watched him for a moment and reached out. She smiled, “Of course.”

An applause resonated from the entirety of the audience. How touching to see such a fated couple ah.

As they danced graceful and light steps, the mermaid princess said thoughtfully: “I wonder why but you rather resemble a servant of mine.”

The dolphin prince was indulgent: “Is that so?” He didn’t care about being compared to a servant. “What mayhaps gave you that illusion?”

The mermaid princess caressed his eyes somewhat dazed: “Perhaps because of this pair of loving eyes. Like you, she had the same pair of enchanting eyes. It was a pity that I never had the chance to see her face.”

The dolphin prince’s arm that embraced the mermaid princess tightened: “Do you love her as much as you love me?”

The mermaid princess held the back of his neck and playfully winked: “Guess.”

The dolphin prince smiled: “My guess is…she certainly wouldn’t dare treat you like I do.”

The dolphin prince leant down and softly planted a kiss on the mermaid princess’ lips.

Looking at the two’s lips that were separated by less than a centimeter apart, the class monitor pondered: Is it time to call the press head squad[4]?

Like our work? Feel free to support us on ko-fi!

Previous | Table of Contents | Next 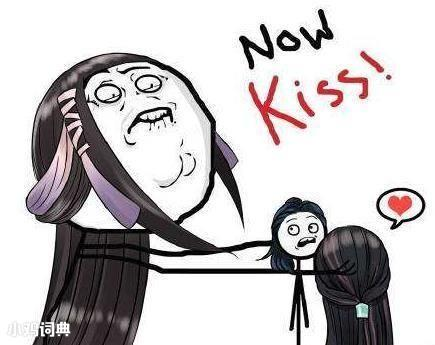